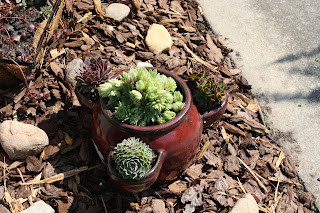 Hens and Chickens for those of us not into Latin names!! I am hooked!! 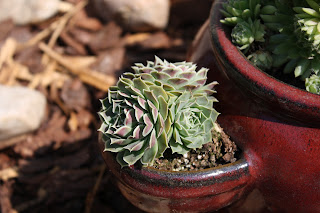 For the past two summers I have not been able to worry with gardening due to caring for my parents and being at the hospital last year with my husband...not that I do very much gardening, but I do like it to look nice around our house. With my precious Rothey now really recovering and us having time at home, I have been able to play around a bit. I have had a pot of rather plain hens and chickens for years. My mom switched pots on me last summer, and they grew like crazy. I decided to separate them, and then I discovered that there are many, many varieties as we went looking for perennials for one new little garden. So...Rothey and I went to many local garden shops and nurseries in our area in search of different sempervivums. The search was on! (It has been addicting!)

In the first picture... I purchased a strawberry jar and was able to use four of the varieties in it. The second picture is a closeup of one of our favorites. Unfortunately many of the tags on my hens and chicks didn't tell what the variety was. 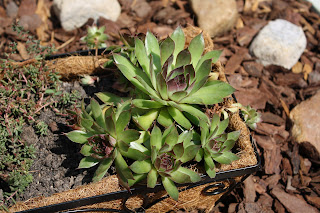 The overhang of our house is larger than usual so my garden near our front steps has to be stuff that is drought tolerant. My father-in-law pulled out a huge prickly shrug, and I decided a different kind of garden would replace it. The search was on for containers to hold my new succulents. I bought two window boxes and filled them with cow dirt (we get that free from a big pile in the pasture) and added 2 kinds of sedum and sempervivum. 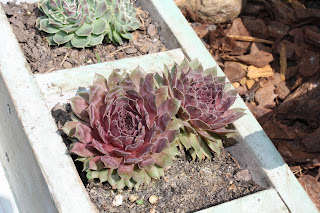 I had bought this interesting shelf at Goodwill last year and decided it could hold some hens...oh yeah, and I used my parents' old watering can that had been forgotten at my nephew's house. I filled it with dirt, added 2 types of hens and chicks and added it to the garden. It's tilted like it is watering the other hens and chicks. 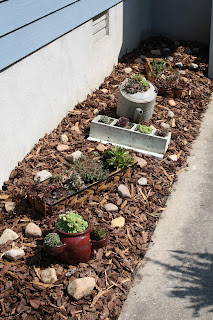 Katie and I went down to the creek and picked up a bunch of rocks and...a drought tolerant garden was created! 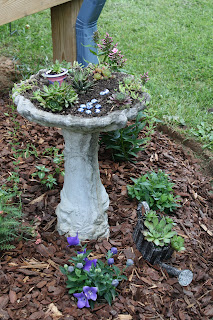 The first garden I worked on this summer was the one in front of the addition we built for Mom. (So much has happened in 2 years. My Dad passed away in August of 2010, my husband became very ill in January of 2011, and my Mom passed away in March of 2012. Yet God is faithful and has carried us through this difficult journey! Oh, and He is still carrying us...we aren't there yet!)

Katie and I went to a garden jubilee on Main Street, and we saw a display of plants in a birdbath. My Mom had this one, and it never held water. So...you see what happened! This garden has phlox, yarrow, balloon flowers, delphinium and bee balm. There are also 2 Mexican heather plants that I later found out were annuals. I would love to just maintain this garden and not replant each year. I purchased an edger and watched a youtube video on how to use it. I knew my Dad used one but I never had. They would be happy with my sudden interest in creating these gardens. 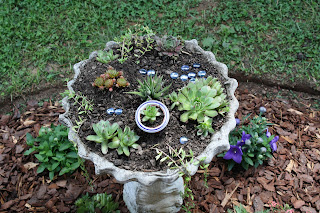 The majority of the hens and chicks in the birdbath are from my original ones. The little clump on the left came from a local nursery, and the one at the top with pink came from our local grocery store's garden shop. The sedum hanging over looking like water pouring out is from my parents' old home. Katie bought the succulent in the center, and we added blue pebbles we had from an old vase. This was a lot of fun to do! 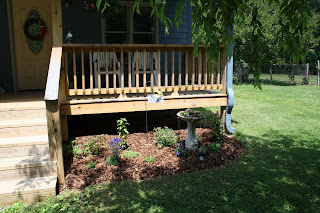 We are going to use stain and water sealer on this porch, and then I would like to plant a hydrangea on the side by the downspout. Yes, it still is a work in progress. I find myself looking for plants my parents' had through the years. Their gardens were something else! Mom would rather buy plants than food. Dad would always buy trees and shrubs for her for birthdays, anniversaries, and just because. He even bought them for me when I was younger.

"We are Blessed!" the little sign says in this potted garden! Yes, we definitely are! 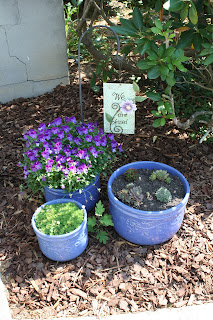 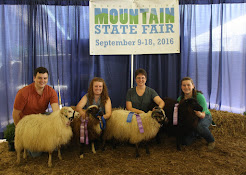 Hidaway Farms Shetlands
Rothey, Christine, Katie and Lauren have been raising sheep since 1996 with Katie's first 4-H market lamb. We specifically have been shepherds to a flock of Shetlands since 2001. We purchased our first Icelandics in 2012.